Similar to DeskDrive but with a smaller memory footprint and without the need of .Net Framwwork Desktop Media creates shortcuts automatically on desktop on inserting removable media in your system.The shortcut on the desktop is also automatically removed on removing the media, making it easy to access the removable media while its plugged in from the desktop.This is available in Linux by default, now you can have the same in Windows using Desktop Media.

Desktop Media is a tiny application for Windows OS that automatically adds drive icons to your desktop. It will detect USB drives, fixed drives (ie. your hard drives), CD/DVD drives, network drives, and even RAM disk drives.If you have a CD/DVD,USB drive plugged in you’ll see the shortcut on the desktop, but if no disc is present, you won’t see the icon on your desktop. 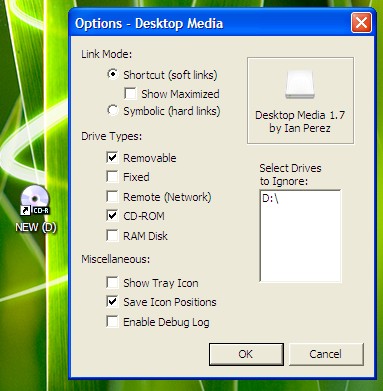