Did you format your system then the you would understand that it’s not the formatting that takes time, but the time spent on installing all the apps that you would generally use on your machine.Earlier I shared an apps like Smart Installer Pack, ZeuApp and Windows Post Install (WPI) but what is similar with the apps is that they need user interaction for installing the app once they are downloaded.

FreeApps is a more convenient by which you could completely automate the process of downloading and installing the app without much user interaction except for a few which require ( such apps a very limited ) and all the software’s selected will be downloaded from vendors’ servers or trusted sources.The app also has its own updater that checks for newer versions of the different programs that are installed on your machine and not for the one that are downloaded using FreeApps.It also has a Uninstaller for uninstalling programs.

FreeApps also has “Freeware” tab that has the list of all the app that are currently supported by FreeApps for downloading the tab lets users download and install new programs easily without much difficulty as all the apps are very well organized into different groups. 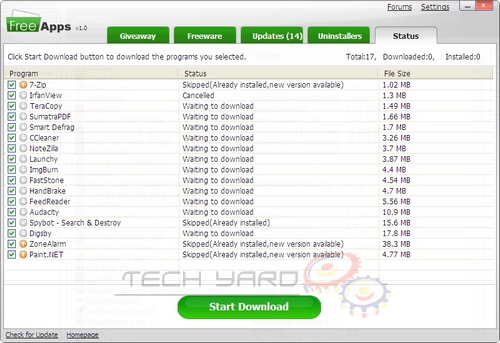 Setup files of all the downloaded files can also be saved into a folder of your choice so that the next time you need to install the same app you don’t need to have an active internet connection, and you can update the programs later using the FreeApp’s Updater.

Note : Some app’s install toolbars and require user interaction, such apps are marked by * and # along with their names in the selection page under their respective categories.

There’s also a portable version of FreeApps which can be very handy, but for that one need to Register at FreeApps which is a free signup and users also get additional benefits like Get prompt notification of the latest freeware and latest giveaways.