Windows XP is by far still the preferred Windows OS by home users, because of the long gap between Windows 7 and Windows Vista’s high performance requirements.Windows 7 does have some very useful features that makes users interaction minimal. 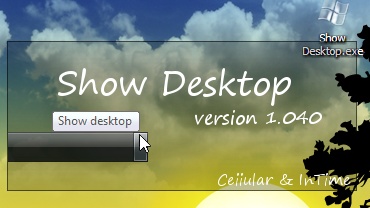 EmptyDesk is a portable app with 2 simple buttons, “Clear Desktop” to hide all desktop icons and “Show Desktop” to restore the desktop icons with the layout intact.It is compatible with all Windows OS versions.

If you are a Mac OS user then there’s Camouflage.