International Mobile Phone Manufacturers like Nokia, Samsung are getting aware of the competition they are facing from Indian Mobile Manufacturers and the completion of 3G auction we can expect 3G services to roll out across various circles.Low cost handsets are not 3G capable and there are very few phones that are 3G enabled under the Rs.10,000.Samsung India has launched Samsung Star Nano a touchscreen mobile phone with 3G Capability for Rs,7320/-

Samsung Star Nano 3G is 2.6 inch touchscreen 3G enabled mobile phone, that comes loaded with social networking apps for SNS like Facebook, Myspace, YouTube, etc.It also comes preloaded with GTalk, AIM, Palringo Chat for instant messaging.The phone comes with 35MB internal memory and is expandable upto 16GB and has a 1.3 megapixel camera,FM radio and Mobile Tracker.It can store up to 2000 contacts on its phonebook and upto 800 SMS.New apps can also be downloaded for free from Samsung Apps. 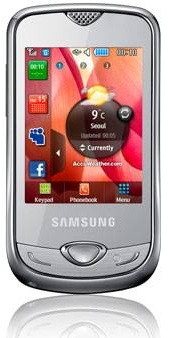