Redundant Array of Inexpensive Disks (RAID), RAID arrays are used to speed up disks access time, and to get better storage reliability and modern day motherboard’s make setting up an RAID Array easy,but the problem comes when you have to more your RAID Array over to another system because you lose RAID compatibility once you switch your motherboard vendor. 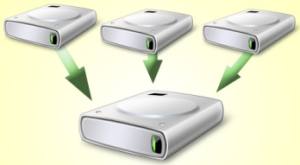 Raid2Raid by DiskInternals is a free universal RAID adaptor that lets you change your RAID Array over to a new motherboard of a different vendor, without loosing the RAID Array.Raid 2 Raid will re-assemble the array and mount it as a single drive letter. Even if your new motherboard lacks hardware RAID capabilities.

Raid 2 Raid Supports Intel, nVidia, and VIA chipsets and all types of RAID arrays, including JBod (RAID 0), Stripe (RAID 0), Mirror (RAID 1), RAID 5 (complete data recovery is possible if any disk is missing from the setup), and RAID 0+1 (RAID 10).

It supports file formats from Windows 2000 (Dynamic Disks) to Windows 2008, including FAT, NTFS, and EXT2 file system support, as well as Classic and GPT Partition Style support and is even makes it backward and forward compatible.