With a lot of around these days about Global Warming and its effects and Power Consumption by [ Read about Edison – Power Management Tool ] computers sum up to great extent and mostly systems are kept idle during breaks and sometimes for a scheduled event and untill this event occurs systems are left switched on.In such scenarios its better to keep systems on standby or hibernate to have all  and auto wake up systems from standby at a schedule time.

WakeupOnStand By Mode & Hibernation, a portable app can wakeup system’s from standby/hibernation automatically at predefined time, startup and execute any program and perform any other action like shutdown/standby etc., automatically after completion. 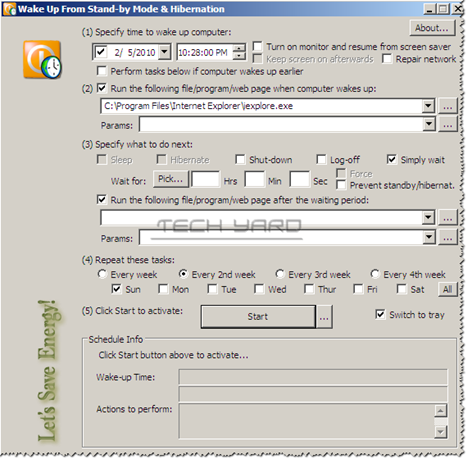 The program can also do launch a user specified program on wakeup, the wakeup can also be scheduled to repeat on specific days and time of the week.

The schedule a system wakeup from standy/hiberantion, there are 5 steps to be followed

Note : To wakeup any Windows-based operating system from a Stand-by mode (and some from hibernation) the system needs to have support for ACPI (Advanced Configuration and Power Interface).