There have been quite a few power packed Dual Sim Mobile Phones from Indian Mobile Phone Manufacturers but there have not been many coming from popular mobile phone companies like Nokia, Samsung, LG, Sony Ercicsson but Samsung has made it into the Dual Sim Phone market with Samsung B5722 under the Samsung DUOS Series a complete touch screen dual sim phone with some really power packed features and one click access to six networking sites.

and social networking support and uses TouchWiz Lite v1.0 user interface the same that is available on the Samsung Corby Series.It has 30 MB internal memory and is expandable up to 8GB.Samsung uses Digital Natural Sound Engine ( DNSe) sound technology and has a Li-Ion 1200 mAh battery with up to 400 hrs standby and up to 4 hrs 30 min talktime and is available in 2 colors. 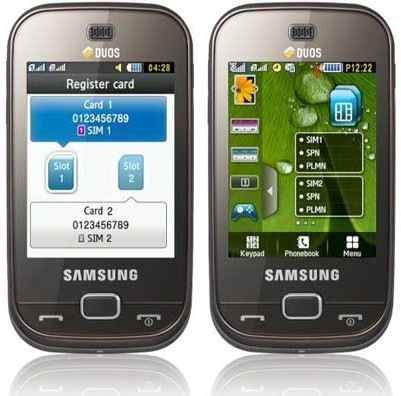