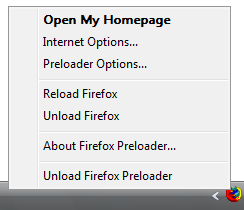 All of you using FireFox might have notied that it takes a few seconds before FireFox starts up.If you are ready to sacrifice a bit of memory you can have your FireFox start faster. Firefox Preloader an open source software designed to load parts of Mozilla Firefox into memory before it is used to improve the its startup time.It can start on Windows startup and sit in the taskbar and ready to use anytime.It can be used even if you have multiple versions of FireFox installed.

It works with with Firefox 2 and 3 as well.This tool might be useful if you want things to start off faster on systems with a bit of lower memory.

This Firefox addon is no longer available.